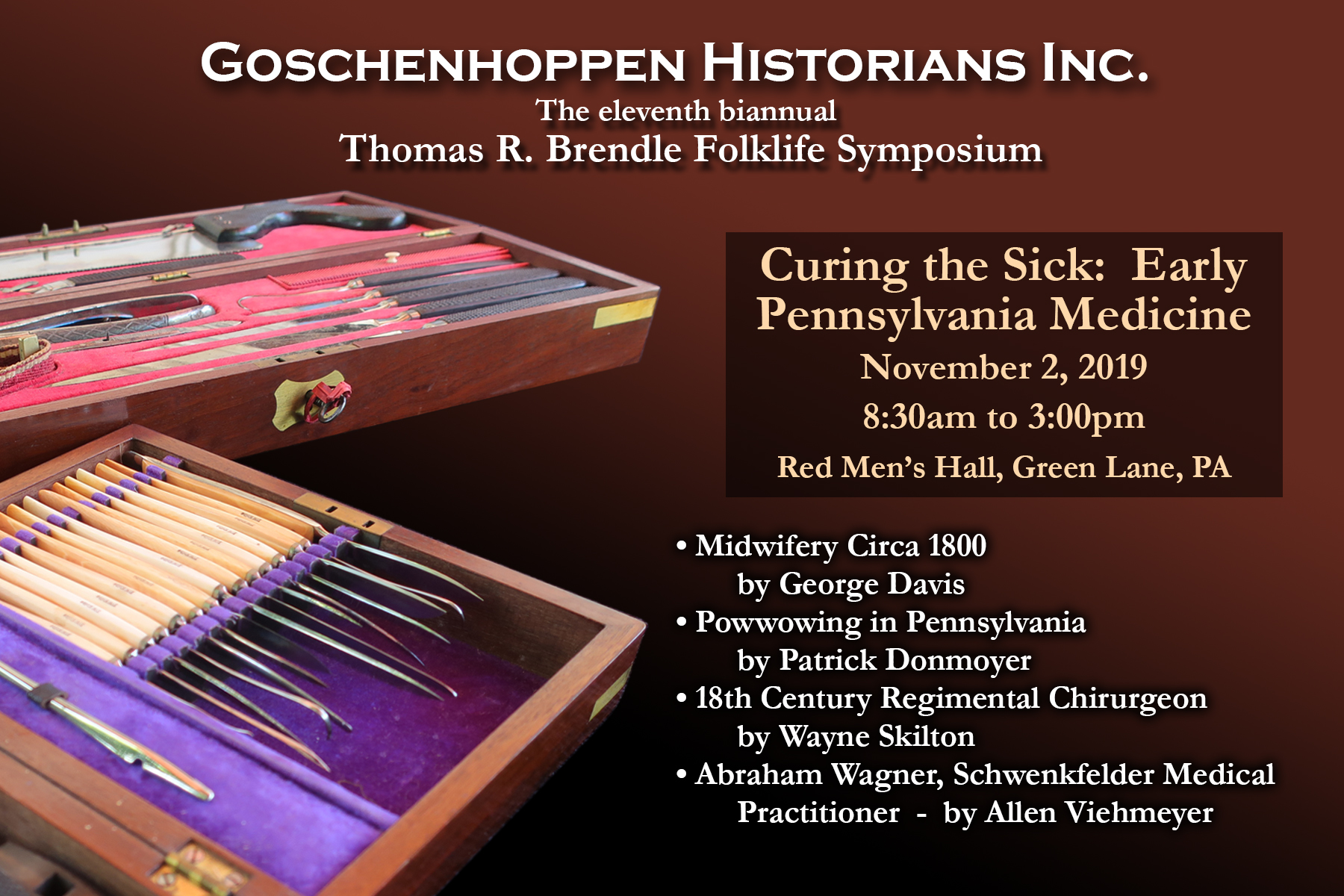 Public presentations of the Pennsylvania Dutch folk culture in the Goschenhoppen region and contiguous Pennsylvania Dutch areas are one segment of the mission of the Goschenhoppen Historians.  An aspect of this mission is the biannual Thomas R. Brendle Symposium. Each symposium presents a different theme, and the eleventh in the series will address the importance of medicine and medical practitioners.  The four previous programs addressed music in 2011, scholars of the Pennsylvania Dutch in 2013, and researching family history in 2015, and the skilled tradesman in 2017.

The eleventh symposium is scheduled for November 2, 2019.   The presenters will be:

During the eighteenth century, formal medical education was rare and what is today considered legitimate medical practice was just beginning to emerge from the middle ages.  While much attention has been devoted to such physicians as Benjamin Rush of Philadelphia, comparatively little is known about the medical practitioners in the hinterland. One of these practitioners was Abraham Wagner, a Schwenkfelder, who emigrated from Silesia to Pennsylvania.  Also, there were midwives practicing obstetrics at a time when hospitals did not have maternity wards. The military employed chirurgeons (to use the eighteenth century spelling) to tend to the wounded. Finally, various ritual practices, generally referred to as powwowing, were used by people in their everyday lives.    Each of our presenters will address one of these topics of early Pennsylvania medicine. Various pieces of period medical equipment will also be available for examination.

This symposium series bears the name of the late Reverend Thomas R. Brendle, the dean of Pennsylvania Dutch Folklorists.  During his years as a pastor of the German Reformed Church, he collected over 15,000 individual entries into ninety-two notebooks, each entry a Pennsylvania German folk belief, folk practice, dialect vocabulary word, dialect riddle or local dialect name of a geographic feature, (i.e., roads, hills, streams, valleys) and additionally, he recorded in the 1930s wire recordings of dialect folk beliefs and music.

The Goschenhoppen Historians owe a good part of their founding to the urging of Reverend Brendle to create a preservationist society in the historic Goschenhoppen folk region in Upper Montgomery County, Pennsylvania.  Brendle’s admonitions were to collect not only the oral traditions (folklore) but the material culture as well. An annual Pennsylvania German folk festival, a Folklife Library and Museum, publications, and numerous tape-recorded interviews with local folklife informants carry out his inspiration.