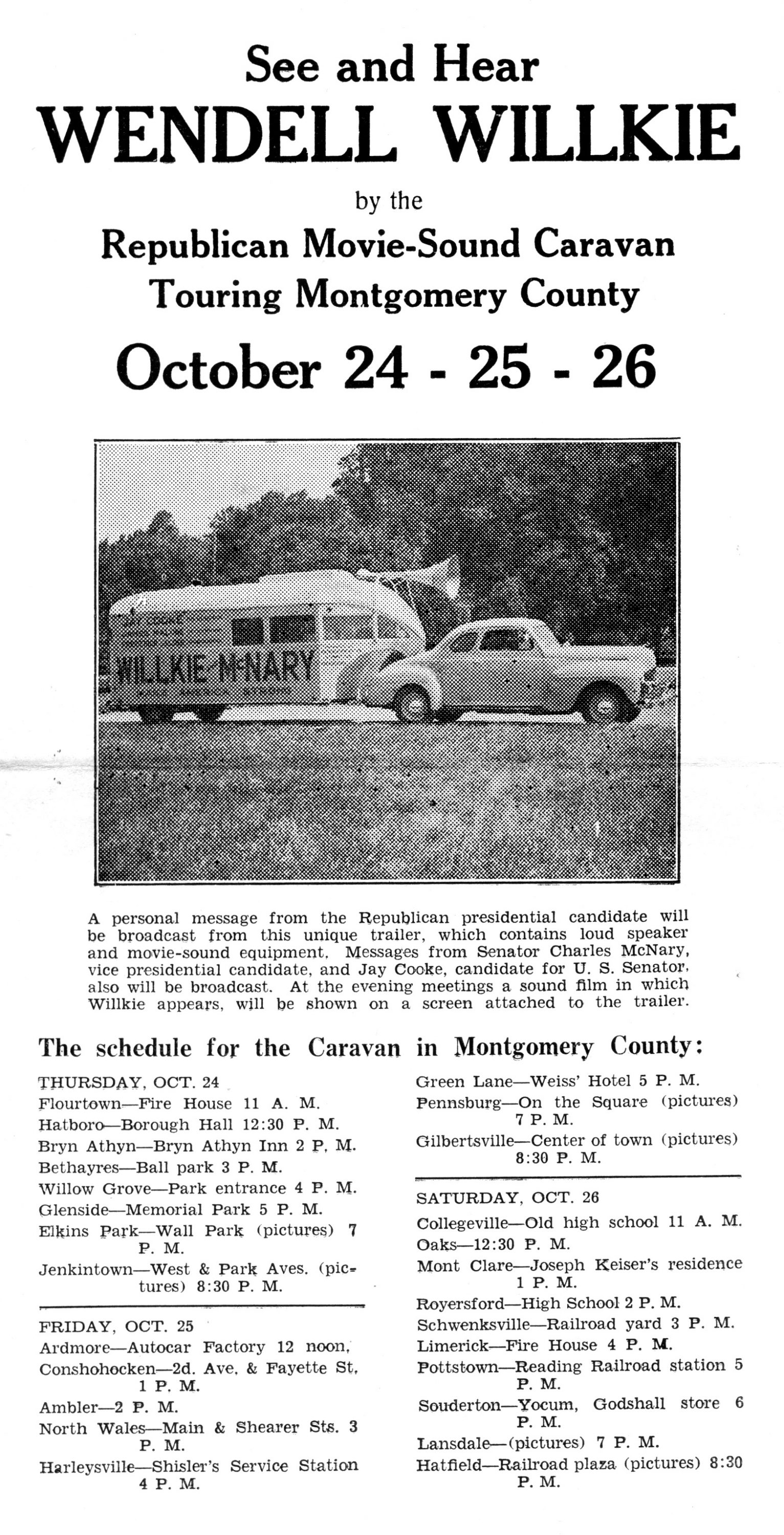 Advances in technology have allowed the 2016 Presidential candidates to disseminate their messages in new and novel ways. However, the usage of unusual methods for enabling the spread of campaign ideas is nothing new.

Representing the 1940 Republican nominees Wendell Willkie and Charles McNary, several Willkie-McNary Movie-Sound Caravans made their rounds. These auto pulled trailers made countless stops in New Jersey, New York and Pennsylvania. The official rhetoric provided to numerous newspapers perhaps describes the apparatus best; what follows here are excerpts from The Journal and Republican of Lowville, NY, Thursday, October 3. “Equipped with a projector for showing sound movies on a 5 by 7 screen, an amplifying system, radio and two phonograph tables for reproducing speeches, the trailer has been acclaimed by those who previewed it in New York, Philadelphia and other cities as the last word in the modern technique of political campaigning.… It is a thrilling departure from the traditional cut-and-dried form of street corner meetings. It gives the audience an opportunity to see the candidates on the screen and to hear their voices. The movies are thrown on the screen by arc-light projection from a standard 55 mm film. The motion picture equipment is the same as is used in the most modern of motion picture theatres.… On the open road when the sound equipment is operated at maximum intensity the voice can be heard over a distance of four miles.”

Regarding the movie content, it was reported that “Willkie and McNary are shown on their modest little farms in Indiana and Oregon which are operated on a 50-50 basis by thrifty, hard-working, corn-belt farmers. The movie reveals Mr. Willkie’s sincere interest in the conservation of the soil and wild life, and his support of rural electrification.… There are exciting shots taken at the Philadelphia convention.”

As evidenced by this handbill from the Historians’ collection, the Caravan’s arrival in Montgomery County came late in the campaign cycle, with only about ten days left until election day. Its three day tour of the county offered a varied range of locations, though it appears the motion picture setup was only offered at the evening sites.

Whether the Caravan directly garnered the duo any votes is not known, but of course we do know that Willkie lost Pennsylvania as Franklin D. Roosevelt was elected to his third term as President.