The Trolley Comes to Green Lane..... 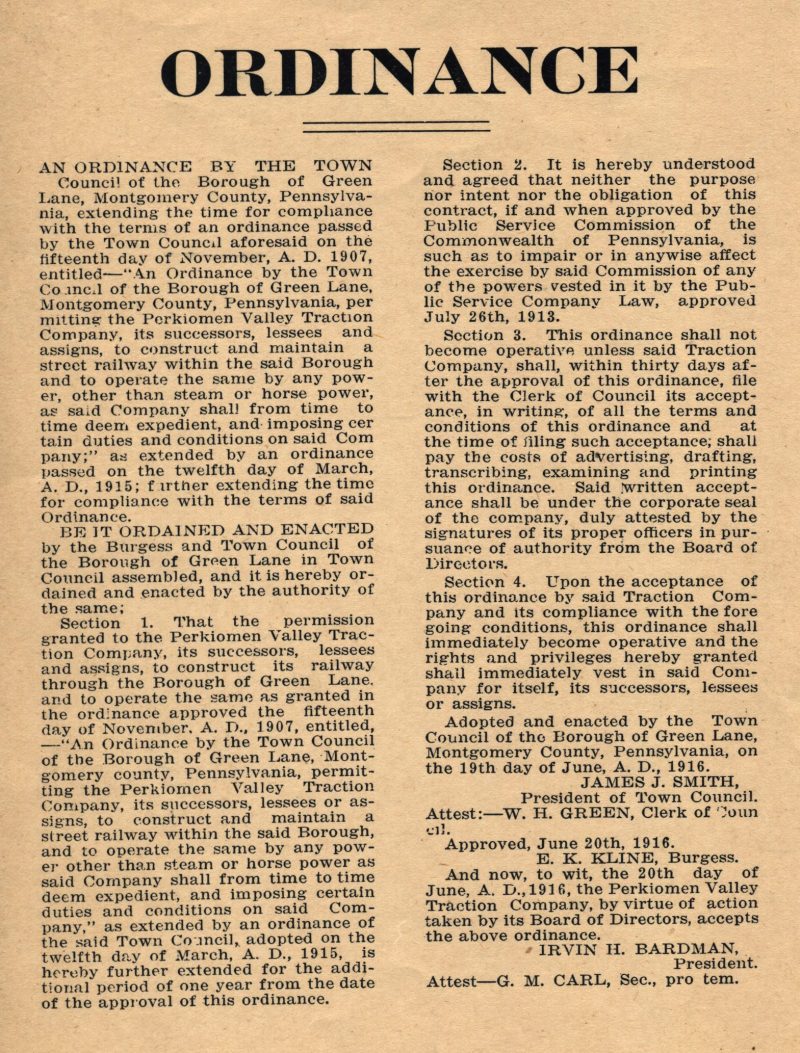 This handbill is one of several printed ordinances from Green Lane Borough which are part of the GH Library collection. Untrimmed, the thin paper directive is sized about 9.25 inches by 5.5 inches.

The late 1800s into the first decades of the 1900s were the heyday of trolleys in Montgomery County. Several lines were created to service amusement parks and recreation areas; some of those areas were developed by the companies which provided trolley transportation to them: think of Willow Grove and Chestnut Hill/White City Park! Perhaps the best known and longest enduring entity with trackage in the County was the Lehigh Valley Transit Company, aka the Liberty Bell Line, which ran from Philadelphia to Allentown and approximately followed the Bethlehem Pike. The Schuylkill Valley Traction Co. ran a line from Norristown that generally followed the Ridge Pike to Pottstown. On the periphery of the Goschenhoppen Region, Skippack and Harleysville were served by the Montgomery County Rapid Transit Company. But the Upper Perkiomen Region was without trolley service, a situation quite dissatisfactory to the residents!

The Perkiomen Valley Traction Company, to which this ordinance relates, proposed one of the (at least) four trolley routes which were to pass through Green Lane. The various suggested lines ran to Pennsburg or beyond; those which extended were to go on toward Palm or Allentown. The PVT Co. first proposed their line from Collegeville to Pennsburg in 1901. Numerous promises of construction were generally followed by inaction. This ordinance, first enacted in 1907, was extended in 1915 and again in 1916. The numerous revisions or reenactments provide evidence for the ongoing optimism that the trolley would still come to town. Finally, road grading was advertised to begin in Green Lane on January 1, 1917. Want ads attempted to entice farmers to spend the winter working on constructing the trolley line. But it was not to be; some sporadic road grading and related activity took place in Collegeville and the work never moved north beyond there.

Incidentally, the rise in personal auto usage and ownership led to the demise of rural trolley service. As ridership decreased, and local residents became more independently mobile, the financial incentive to complete new transit lines fell away. By the time the Liberty Bell trolley made its last run in September 1951, the idea of a trolley route through the Upper Perkiomen Region was but a distant memory in the minds of a limited few.

(Much of the above trolley related info was derived from “Trolleys of Montgomery County Pennsylvania” by Harry Foesig and Harold E Cox. Copyright 1968.)