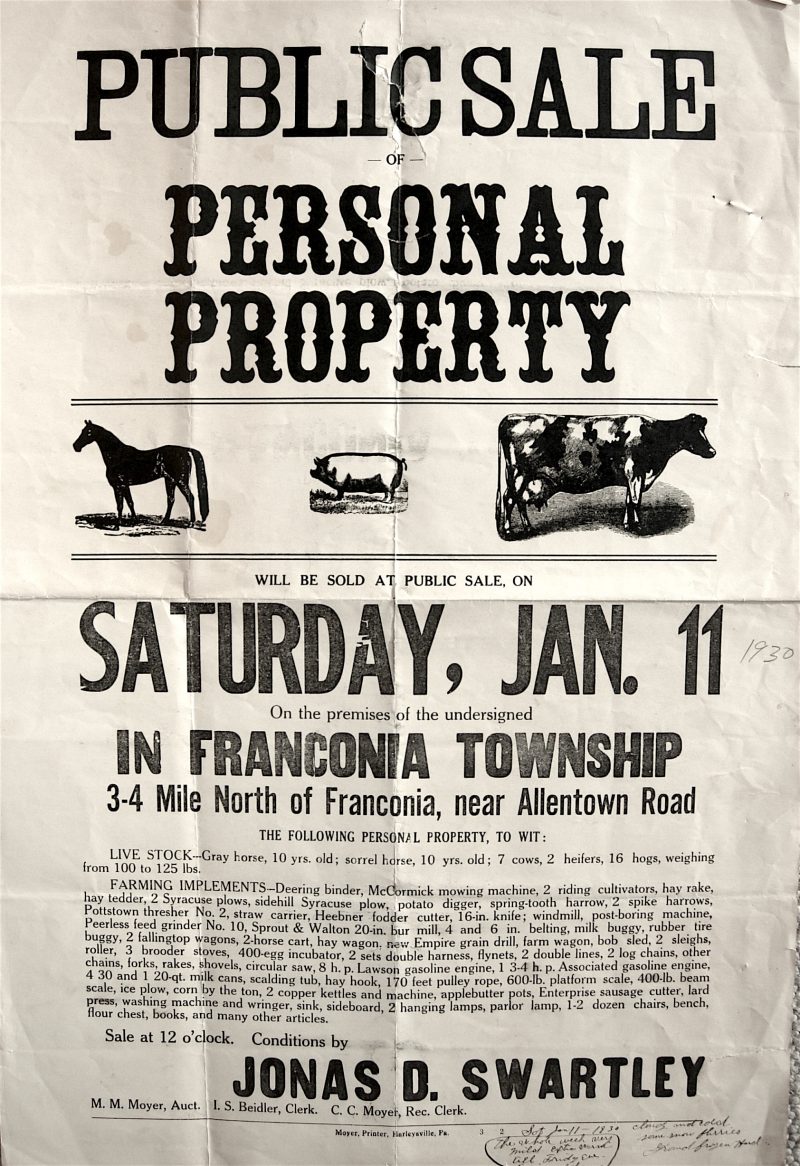 This 1930 “Public Sale” or auction broadside is one of several from Franconia or Lower Salford Township in the GH collection, ranging from the 1880’s to the 1940’s. Measuring about 22 inches high and 15 inches wide, its size is mid-range for such an advertisement. Categorically they vary from being modest sized handbills to multi-foot posters. Pencil dated 1930 at the right side, it’s accompanied by a clipping from the Schwenksville Item which repeats the advertisement verbatim (though with the inclusion of an actual year date). Such promotional broadsides could frequently be found decorating the walls of hotel barrooms, toll houses, general stores and other similar places prone to having a captive and receptive audience. Once their initial functionality had passed most were discarded; a frugal proprietor may have occasionally saved a few for use of the blank reverse as “scratch paper”. Frequently printed by the local newspaper office or “job printing” shop, this piece was done by “Moyer, Printer, Harleysville, Pa.”

Then as today nearly any tangible piece of property could be and often was sold at auction. This particular event featured a variety of live stock - cows, hogs, a couple horses and heifers. Also of note were various types of farm machinery and implements (including a Heebner fodder cutter, made in nearby Lansdale). Plus, a sundry assortment of household goods to perhaps entice the housewife to come along; and, of course, the standard finishing note which worked to draw the curious, “many other articles”. Another sale bill in the collection, dating from 1924, features items perhaps desirable almost a century ago but no longer holding that distinction: “set asbestos sad irons”, “geese feathers”, “vinegar barrel” and so forth.

Intriguing is the inked hand notation at the bottom of this broadside, “The whole week very mild Extra warm till Friday eve. Turning cold… cloudy and cold some snow flurries ground frozen hard.” The sort of notation to be made only by someone with a financial interest in the outcome of the sale…